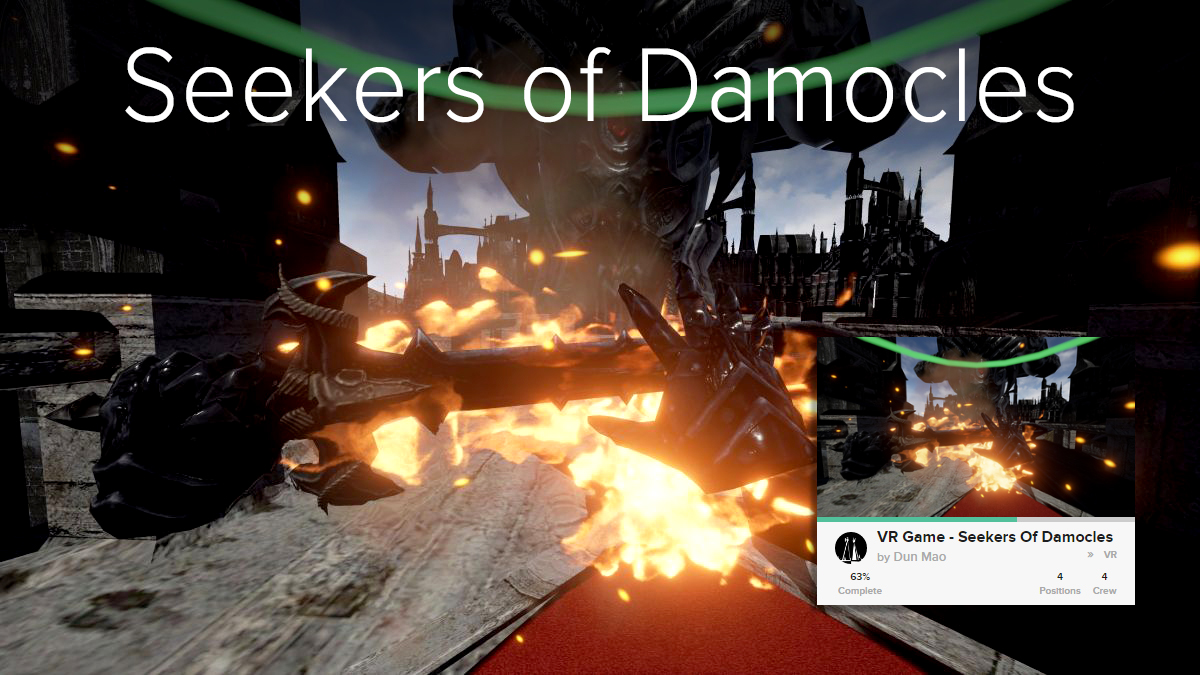 We are incredibly proud to announce that the first VR experience created with the Artella platform, Seekers of Damocles has a demo now available on Steam Greenlight and IndieDB (links below). Here to talk to us about the journey thus far creating this incredible VR game is the creator & director, Dun Mao.

Interview with the creator of, “Seekers of Democles:” Dun Mao

Artella: What is your background in gaming and VR?

Dan: Game development has always been my hobby. I founded a game development society in my High School, made my first game with my friends using RPG Maker (an old-school non-programming game engine). I learned Unity in college and taught myself C#. Then, since the first appearance of Oculus Rift, I’ve been actively looking for a chance to gain experience in VR development, believing it to be the platform for the future of gaming. During my postgraduate study, I begin to use Unreal Engine 4 and started the development of Seekers of Damocles.

Artella: Tell us where the inspiration for Seekers of Damocles came from?

Dan: The general idea of S.O.D. is very simple. I guess it’s every boy’s dream to take an adventure in a fantasy world, fight evil dragons with a legendary sword and becoming a hero that saves the world. Like in all those medieval fantasy movies such as Lord of the Rings. We want to experience that amazing journey by ourselves. With VR technology, we can make these dreams come true now. A player is no longer a viewer of the protagonist’s story, they can now enter the world of imagination and take the epic adventure by themselves.

Regarding the sword fighting combat experience we have in S.O.D., there’re two games that have inspired us greatly. Infinity Blade and Sword Art Online. Infinity Blade is an iOS mobile game which features realistic sword fighting. It made the best of the smartphone touch screen to create an innovative gameplay which has never been seen on PC or Console games. It shows the potential of the smartphone as a gaming platform, it’s more than just casual games that help to kill time, it can be as good as Console games. When I look at the VR markets, the first thought I had in mind was, “We need one those!”

Another inspiration is Sword Art Online, which is a fiction game described in a Japanese light novel series written by Reki Kawahara. It’s a mmo VR game that features sword fighting. Although it’s played with much fancier devices than Oculus and Vive, it shows the VR game people are really looking forward to. Immersive gameplay and endless exploration in a boundless world. Even though it’s still unrealistic for us to make it, it’s what we’re aiming for, the future of VR gaming.

Artella: Why VR and what were the new challenges you had to overcome in this medium?

Dan: If you’ve ever played a VR game, you will never forget about that experience. In traditional games the player interacts with the Virtual World through indirect methods (i.e. pressing a button). However in VR, you can interact with Virtual objects in the most intuitive way, by touching it directly. This opens so much freedom and possibilities to gameplay design. This makes gaming become a new form of sport. You need real skill in reality to be the best in games. And that creates an immersive experience that can make the player believe his in another world.

We’ve faced all kinds of challenges during the development process. There’s not yet any guideline for VR development for us to reference, some haven’t been done by anybody before.

There are three main challenges we found in VR development.

Artella: What was the hardest part of the project? What tips did you learn along the way that others might benefit from?

Dan: The most difficult part is tuning the light for the scene. VR has many restrictions on lighting and shadow casting. We still haven’t got the exact effect we’re looking for. And, since most of the environment artists don’t have any experience in VR development, we’re still exploring all options. We have learned some tricks to prevent framerate drop in VR.

Artella: How was Artella able to help you along the way?

Dan: As a programmer with no art skill, it’s very hard to for me to make the game visually pleasing. I’m also new to the industry so I don’t know any artist or having connections with other studio. Artella is a perfect place for developers like me to meet with talented artists. The artists we’ve recruited through Artella have excellent skill sets. Our project could not have gone this far without those artists’ hard work.

With the help of Artella, we can aim for a higher graphic quality standard on our next project. We probably would still use Skype for group chat, but besides from that, Artella has all the basic functionality to handle our entire workflow.

Artella: What advice would you give to someone wanting to create a VR experience like you guys have?

Dan: There are still a lot of unknown boundaries in VR development. Sometimes an idea can work and sometimes it can fail. VR development can be more difficult than developing a PC or Console game. I’ve seen a lot of projects end up with only as prototypes. So always think big but start small. I’m glad to see that more and more developers are working together to produce quality VR titles. It’s tough to work in this small market now but with the help of everybody, VR can become the future.

Artella: How can people experience Seekers of Damocles now?

Artella: What’s next for you guys? The demo is now available, but you want to take it further. Tell us more.

Dan: Yes, we only released a demo to show the gameplay, yet there’re still many things to do to make it better. We will improve the graphics to make the game more visually appealing, add more terrifying monsters to challenge the players and create more dungeons for players to explore.

We’re aiming to present the best sword fighting experience that takes the best of VR technology. We want people to look at our game and think, “I’ve got to buy a VR headset for this!”

Artella: Anything else you want to add?

Dan: We wish Artella can become the most popular gathering place for artists and developers to exchange their ideas and improve their skills. We thank the team behind Artella for creating this platform that helps making our project possible.