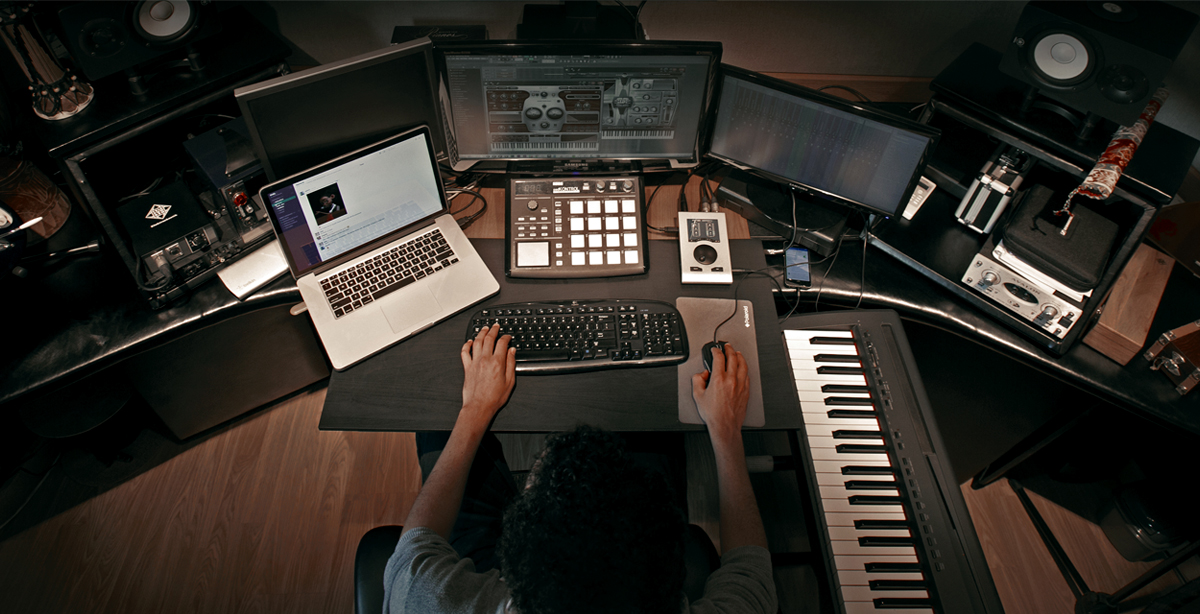 I usually start with spending time with the picture, knowing it inside out, which allows me to get more space for loving it; and from a technical P.O.V, watching more than once always gets me  between the lines and into more details. That’s exactly where I want my music to be. At this stage, I start imagining different approaches to the score, and it wouldn’t harm writing down any immediate ideas, just in case.

I start to figure out (with either the director, or the producer, or both) what the sound of the score will be, its overall sonic identity. This can be achieved through a sonic reference or through creating a brand new sonic identity. The end result is usually a hybrid of both. In this process, I’m taking non-permanent decisions like: which instruments I’ll be using, which scales, which time signatures, and what will be the approach for the final mix. Also, it’s important at this stage to be prepared for all the logistics of the scoring process until delivering a final mix, this might be in the form of getting in touch with the facts: deadlines, budget, music department team, delivery formats, and frame rates…etc. At this stage I also have to get myself in a deeper relation with the music reference(s) if there are any; this can be achieved by watching the original picture of the reference and analyzing how it was crafted to properly interact with the picture. Another hack I always find very effective is listening to the reference(s) or other tracks in the same mood(s) while sleeping, this way I tend to eliminate the distraction of my brain’s automatic process of analyzing the music, in other words, I just let my body absorb the music in a more pure way like a baby. 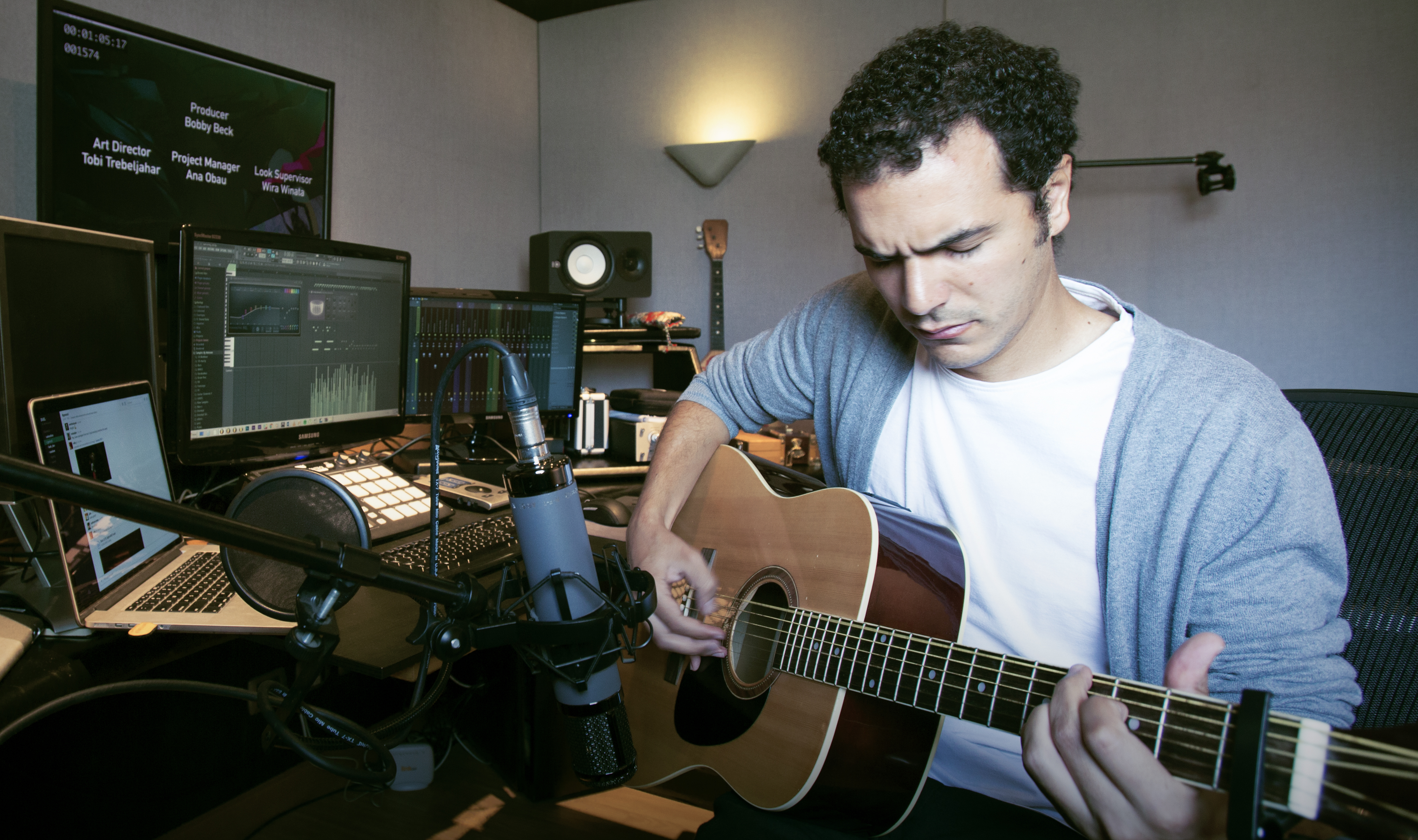 The process of actually writing the music is by far the most enjoyable part of the whole story, that’s what all this is for. I just love preparing myself for this stage, organize my workstation, maybe take a shower and put on a perfume, dim the lights; I believe every artist has his/her own way to set the right mood to call the muse. It’s imperative to get rid of all potential distractions before getting into this stage.

What I technically do, is that I watch the scene and start imagining, if that scene was scored in a way that would blow my mind, how would it sound like? Just pick the scale and the tempo, trial and error, oh that feels right, ok let’s just compose with one instrument for now, not to give time for ideas to run away. In this music genre, what’s the best instrument that would tell the idea the clearest way? A piano? A guitar maybe? Or could be a synth on a piano roll? Usually, a great, unique idea flies away and quickly evaporates into thin air, so when the inspiration is present, I must be ready with whatever tool to make sure I capture this on the spot in a way that can easily get me back to the same point. It’s so bad, yet so easy to forget promises after getting hold of a lover, because now is the most important time to remember those promises, the sonic identity, the palette, the reference sound if there’s any. A tricky trap that composers usually fall into is the “underscoring”, which is the process of scoring under a dialogue.

I believe every composer has his or her own way of underscoring. For me, the first thing is to mix the dialogue as much as I can as if I’m the dubbing mixer, I understand this might not be my job, but why wouldn’t I spend some time on something that would make my job way easier? Furthermore, directors would always prefer listening to something close to the final soundtrack. After mixing the dialogue, I must make sure to score while the dialogue track is active all the time, if I ever get drifted with the music and mute the dialogue there is a high probability I might delete and start from where I muted the dialogue. I have to make the effort to keep in mind that I’m avoiding unnecessary music accents, ornaments, scale changes, and anything that might grab the attention away from the dialogue.

How you score low budget films?

My key for scoring low budget films is that I do not underestimate the film just because it’s a low budget film, I’m still giving my maximum, and I’m doing the extra effort to balance the equation. That is, of course, if the film is worth it.

I usually spend a few days a month discovering what new plugins are out in the market, read about them, watch reviews and try demos. If I like them, buying them is always the best option, I would never recommend downloading cracked versions.

Spending enough time on automating the dynamics, expressions, main volumes, filters, EQs…etc. That makes all the difference. Using a Wacom to draw them, recording them using modulation wheels, breath controllers, using analog or digital knobs and faders. Whatever works, my key at this point is spending enough time and effort. 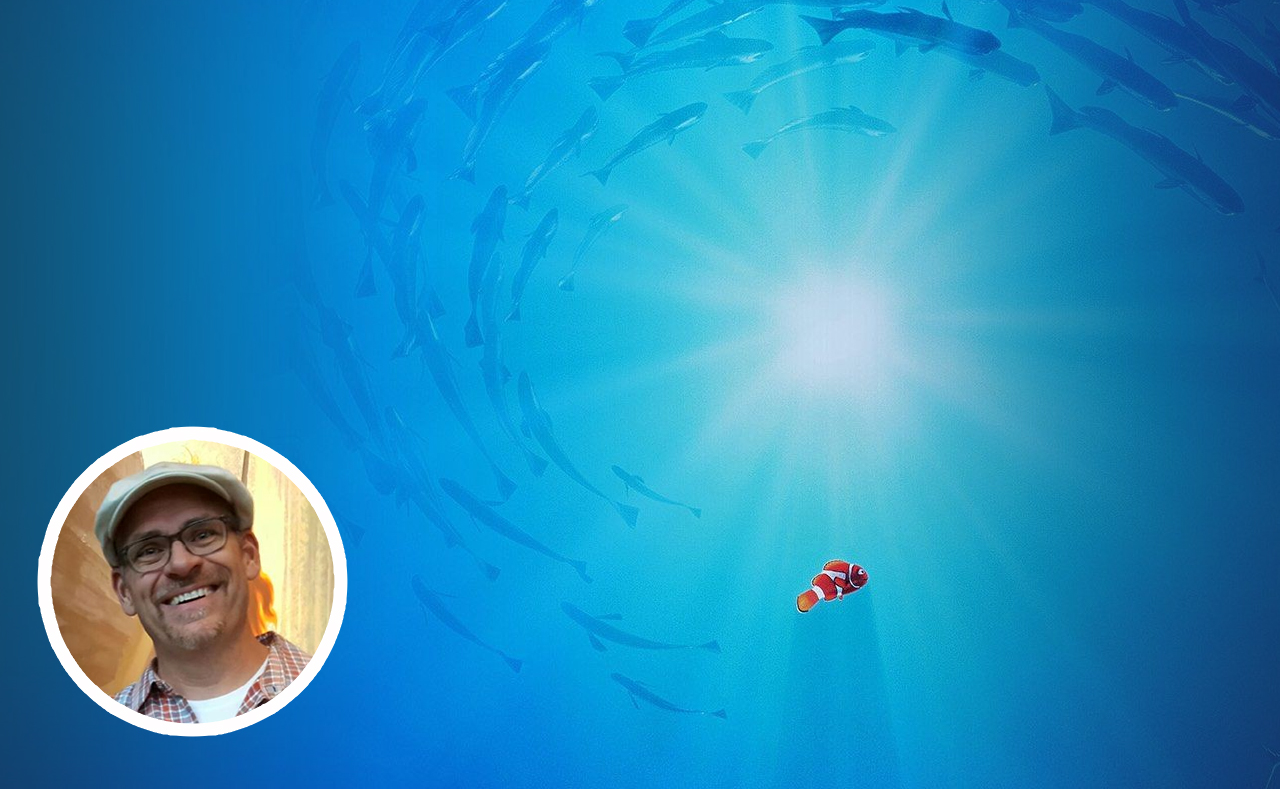 Sound real but don’t be

In low budget projects, I tend to listen to what’s inside my head as a whole and not in any kind of individual process, I wouldn’t care if it doesn’t make sense to the orchestrator or musicians because they’re not coming today! I just play around and use the wrong patches that sound right to me, for example, I might merge these:

Just to get a one real-sounding violins line, all playing in unison but each with it’s own unique automation.

Lastly, and most importantly, I always remind myself that it’s all about the film not about my music. More than ten years ago when I decided to dedicate my entire life to scoring, I used to get pissed off when directors would ask for too many changes, or even to throw this away and start over. The music sounds amazing are you kidding me? It took me a while to realize that no matter how great the music is, if it doesn’t support the picture, then it’s not going anywhere.